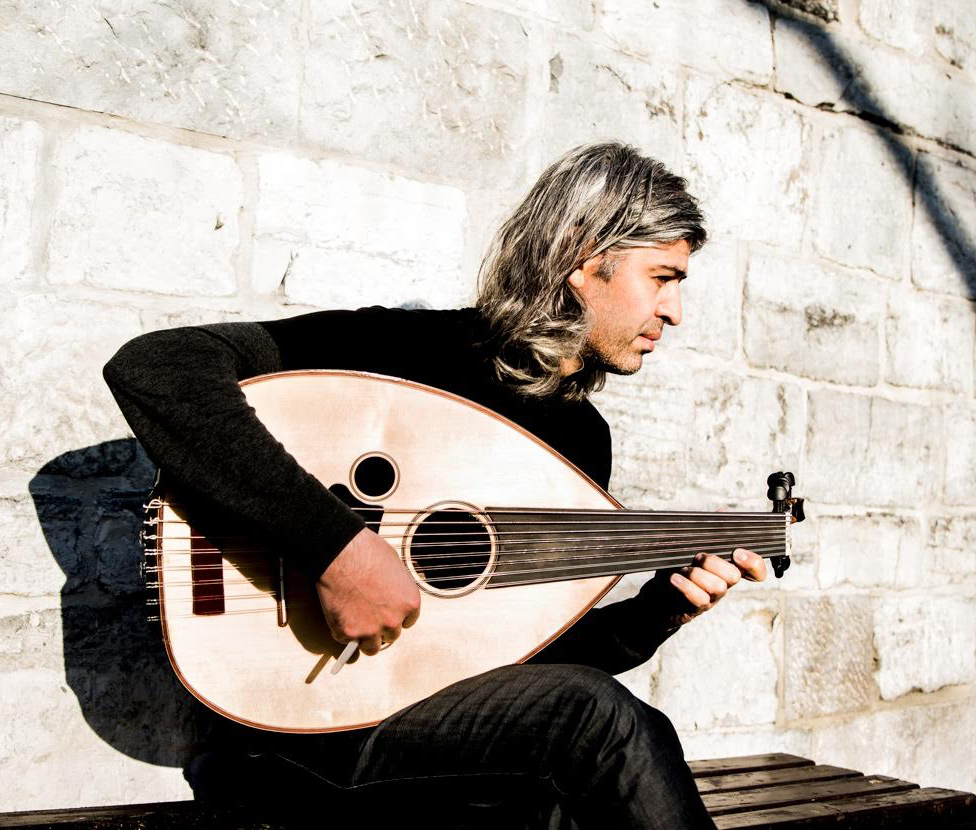 Mehmet Polat is one of this era’s greatest composers and performers in Middle Eastern music. He plays a custom-made oud with extra low bass strings, which add both gravitas and lushness to an instrument which for thousands of years has channeled resonantly moody sounds. His latest album Ageless Garden, streaming at Spotify, is a characteristically eclectic, often haunting mix that draws not only on the bracing, chromatic Turkish maqam tradition but also on Iranian, Malian and flamenco sounds. It’s one of 2018’s best releases in any stye of music. The opening track, Hasret is essentially a one-chord jam, a tense, broodingly percussive theme dedicated to Hasret Gultekin, a promising Turkish musician maimed in a 1993 attack by extremists. Likewise, Aylan is an elegy for a Syrian refugee child who perished during an attempt to escape by boat. The starkness of the low strings give the intro to this steady, moody stroll the feel of a jazz bass solo over Alper Kekec’s flurrying percussion. Polat slowly and emphatically builds an upward drive, his incisive chords contrasting with darkly elegant cascades and hypnotic, circular phrasing. It ends unresolved. Polat opens the even more epic Hasbihal – which means “intense conversation” in both Turkish and Persian – with a spare, hauntingly improvisation built deftly around echo effects, a common device in classical Iranian music. From there Polat develops a theme that’s as catchy as it is somber, anchored by Pasha Karami’s slow, muted dumbek groove. The bass solo at the end is one of the album’s most luscious moments. Polat keeps the theme going, picking up the pace with his spiky phrasing and incisive strumming in Aftab, meaning “sun” in Persian. My Urfa is a shout-out to the musical cross-pollination that Polat’s Turkish hometown – a place he hasn’t been to for two decades – is known for. Over Kekec’s spare groove, Polat begins with a hypnotic, Iranian-flavored intro, then takes the music into darker, more chromatically edgy Arabic territory before a slight return. Polat explores his fascination with Indian music with the playfully upbeat, catchy Something Is Moving, Yama Sarchar’s tabla providing an unexpected 2/4 dancefloor stomp alongside the oud’s dancing microtones. Embrace It, with Shaho Andalibi on ney flute and Zoumana Diarra on kora, is a hypnotic, practically twelve-minute mashup of Iranian dastgahs and African beats, the ney’s breathy harmonics contrasting with the sparkle of the kora. Polat builds a slinky, funky groove in A Wise Touch, overdubbing a catchy, insistent tune over a muted series of bass riffs. In Solitude, another solo piece, is more spare, a series of variations on an enigmatically anthemic, downwardly stairstepping riff. The album’s final cut, An Anatolian Bulerias, sets flamencoish flurries from the oud over a flickering 7/8 drumbeat. On one hand, this album is an immersion in traditions that run deep, back through many centuries. On the other, Polat’s music is completely in the here and now and unlike anything else coming out of Turkey and the Middle East.

No related portfolios were found.